I find this picture disturbing, gross, and sad all at the same time. This shows you the desperation of the people of Cambodia. 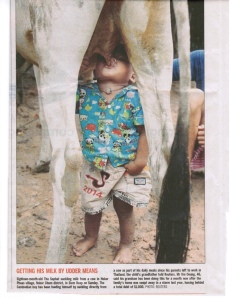 This clipping is from a Singapore newspaper. This boy lives in a village near Siem Reap, which is the same district where we worked and stayed. The caption reads,

Getting his milk by udder means –

Eighteen-month-old Tha Sophat suclking milk from a cow in Nokor Pheas village, Nokor Chum district, in Siem Reap on Sunday. The Cambodian boy has been feeding himself by sucking directly from a cow as part of his daily meals since his parents left to work in Thailand, the child’s grandfather told Reuters. Mr. Um Oeung, 46, said his grandson has been doing this for a month now after the family’s home was swept away in a storm last year, leaving behind a total debt of $1,000.

Unfortunately, strange and disturbing stories like this are commonplace in Cambodia. So many people, children especially, find themselves in desperate situations like this.  A debt of $1,000 may not seem like too much here in America, but to most Cambodians, it’s a fortune. Many Cambodians, for one reason or another, find themselves deep in debt, with no way to get out. That’s why so many children are sold into slavery/indentured servitude.