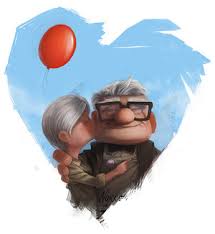 One of the lady’s from church asked me to help with her elderly mother who had been hurt in a fall. Her mom had been staying in a rehabilitation center to recover, and now that her rehab was finished, she and all her belongings needed to be taken back to her care home.

We got to the rehab center, and I met her mom. She’s 85 years old, but still has a youthful look to her.

“We’re taking you back to see dad today,” said the lady to her mom.

“What?” asked the older lady. She’s a bit hard of hearing. When you get to be her age, I guess you can’t blame her.

“We’re taking you back to the care center,” she said, a little louder. “You’re going to see dad.”

“Oh!” said the elderly woman. “I haven’t seen him in so long. I don’t even remember what he looks like…” she said, bittersweetly.

I learned how she had gotten hurt: her husband had fallen, and she was trying to help him up. Her husband is a lot taller than her, so while trying to help him, she herself fell. I guess the husband’s fall wasn’t too bad, but her fall had been fairly serious.

“It’s been about a month, right mom?” asked her daughter. “You got here (to the rehab center) about a month ago, right?”

“It’s only been a month?” I thought. From the way she was talking, it sounded as if she hadn’t seen her husband in a very long time. I thought it must have been at least 2 or 3 months, if not more. A month isn’t very long, but I guess it feels like a lot longer to her.

“Are you excited to see him?” I asked.

“No,” she said. Then she laughed. “Of course I’m excited. I feel so nervous. That feeling inside…it never goes away.”

They’ve been married for 58 years, and she still gets butterflies when she sees him.

We gathered her things and headed over to the care home. There we found her 89 year old husband, a tall, skinny Asian man, sitting at a table playing a puzzle, his back turned towards the hall. The attendants tried to tell him that his wife would be there shortly, but he’s hard of hearing, and didn’t understand.

As she was pushed in on her wheelchair, she saw her husband from behind. She tried to get his attention, but he didn’t hear her. As she was wheeled behind him, she playfully hit his back with her elbow. He looked up from his puzzle, trying to figure out who had touched him. But by the time he turned around she was already gone because she was moving on her chair, so he still didn’t see her. They were just missing each other left and right.

Finally she was wheeled around to the other side of the table, and they saw each other face to face for the first time in “forever” (one month). He chuckled in surprise. She smiled at him, quietly said hi, then looked down, as if she were just a shy young girl.

They’re 85 and 89 years old respectively, but they act as if they’re still a young couple. 58 years of seeing each other every day, getting to know each other inside and out, seeing each others good sides and bad sides, and still their eyes light up when they see each other. They’ve raised 3 kids and grown old together, and still they’re excited about each other as if there’s no one else in the world they’d rather be around. Their hearing, eyesight, and other senses may be going, but their love appears strong, so much so that though she’s just a little old Asian lady, she tried to help her husband when he fell – even though he’s way bigger than her – and she herself fell and got seriously injured as a result. Yet she doesn’t seem to regret it. (They’re literally just falling all over each other. Haha.)

I’ve got to believe that a major factor as to how people can be happily married for that long is because they’re both very good at forgiving and forgetting. (Although old age might be helping them in the latter department. Haha. Just a joke.) Relationships in life are between two very imperfect people. We all have faults and make mistakes that can unintentionally offend, cause harm, or rub people the wrong way. I think so often we get caught up in little, petty things that we lose track of the things that are really important in life.

We are told that people stay in love because of chemistry, or because they remain intrigued with each other, because of many kindnesses, because of luck . . . But part of it has got to be forgiveness and gratefulness. –Ellen Goodman

Above all love each other deeply, for love covers over a multitude of sins.